When people ask me what my favorite roles have been, Long John Silver is usually the first one that comes to mind. It was 2009, I was 32, and the whole process was a dream come true. Except for the part where I jacked up my back for the rest of my life, but “pros and cons”, you know? More on that later.

I thought I understood Long John back then, but I was only scratching the surface. I mean, what kid doesn’t want to be a pirate? I loved the challenge of it. Doing an entire show with one leg literally tied behind my back. Some of my best friends were in the show with me, and others who were in the show would become some of my closest friends. We sailed the high seas, crossed swords, and found buried treasure.

The show wasn’t without its challenges. In one of our final dress rehearsals, I accidentally jumped off a platform and fell a couple of feet. Normally that would be no big deal, but I had my left leg bound behind my back, as Long John Silver famously has only one leg. Landing on just that leg threw my back out, and when I took off the leg and back brace, my spine had a pronounced kink in it. With a chiropractor and massage therapy, I recovered, but ever since then, I’ve had lower back pain, and once or twice a year my back will lock up in spasms.

Fast forward to 2022, and I’m deep in rehearsals for another take at Long John. This time, we’re only doing a couple of scenes on one leg, which will be much easier to do. The rest of the time, I’ll have a brace on that will look like a peg leg and keep my leg straight and stiff. MUCH easier to do and much safer.

This time around, I have a much deeper understanding of what drives a man like Long John Silver. He’s lived a life of adventure, made difficult choices, and dealt with the consequences of those choices. Above all, he’s lived his life on his own terms. 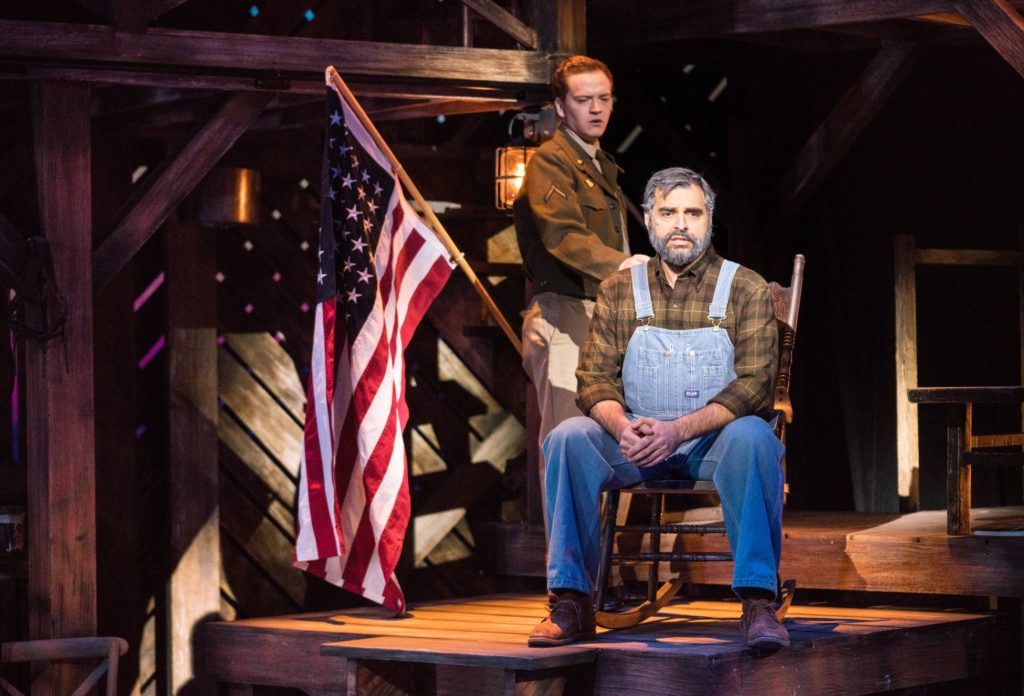 In costume and makeup as Daddy Cane in Bright Star

I’ve been able to play some amazing roles in my career. In the last couple of years alone I’ve played Dom Claude Frollo in The Hunchback of Notre Dame, the bounder Elton in The Scarlet Pimpernel, the Ghost of Jacob Marley in A Christmas Carol, Gomez Addams in The Addams Family, and now I’m so thrilled to be able to play Daddy Cane in Bright Star at Hale Centre Theatre.

Bright Star is a beautiful show created by the legendary Steve Martin and Edie Brickell. It tells the story of Alice Murphy at two key points in her life – as a teenager in the 1920’s, and then as a grown woman in the 1940’s, all set against the backdrop of life in North Carolina.

I play a self-proclaimed “hillbilly” who loses his wife shortly before his son comes home from World War II. He’s a good man and a loving father that has done his best to take care of his son and prepare him for the world.

I love playing parts like this. To be truthful, an actor has to find the parts of himself/herself that are present in the character and then fill in the gaps with creativity and passion. As Daddy Cane, I’m able to draw on my own experiences raising two sons, and the joy I feel at watching them become fine men. Plus, I get to grow my beard and wear flannel shirts and overalls!

Stay tuned for the next project! Auditions are just around the corner!